This is the review of two Dynamique Audio cables, the Shadow 2 interconnects and Shadow 2 power cord. I came across this company (based in UK) and I strongly appreciate the details they provide regarding their design choices. Rather than selling “voodoo” or marketing obscure secrets to audiophiles, everything is explained from an engineering point of view. This way, the buyer is made able to understand the principles ruling cable designs, and make a conscious purchase.
The first principle of Dynamique Audio is to preserve neutrality: cables are not meant to be used as “equalizers”, but rather to maximize detail, power and transparency.
The Shadow 2 power cord and interconnects are in the middle-to-upper range of their respective product lines. 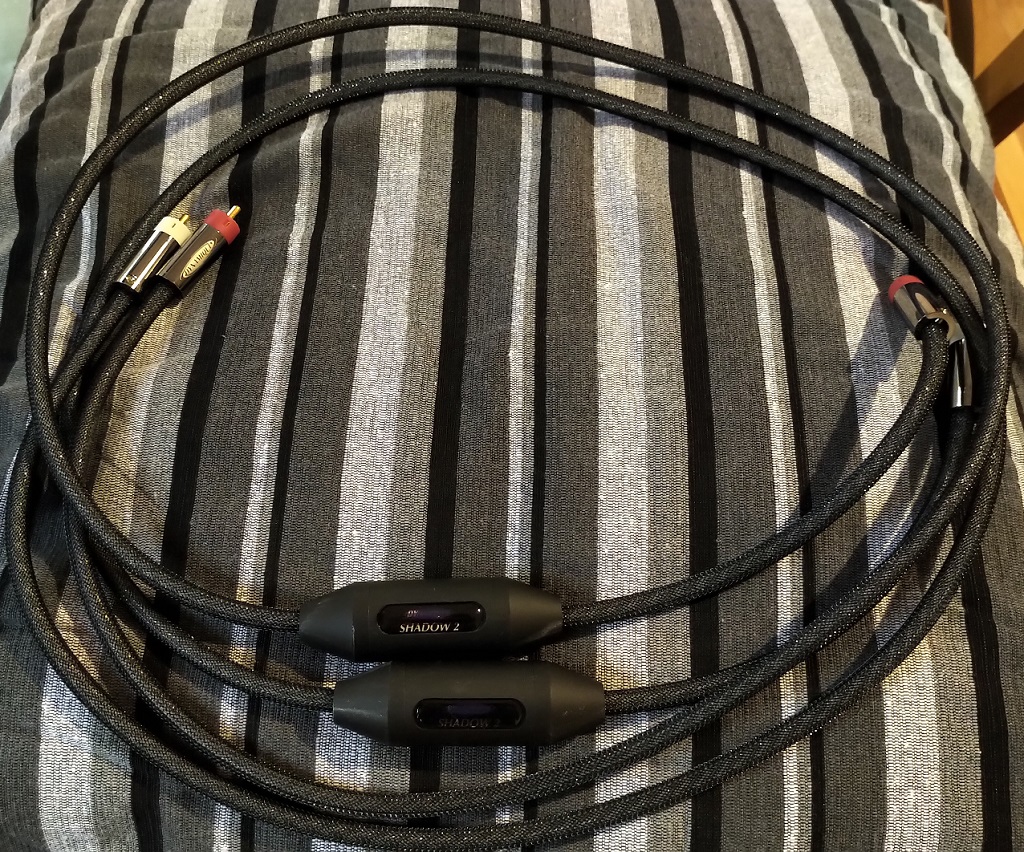 The main goal of cable design is to minimize noise during signal propagation. Noise is mainly generated by magnetic fields, and it results in limiting resolution and obscuring details. For this reason, designing cables is much more complex than using expensive materials: the most important aspect is cable geometry (how conductors are arranged), because that determines how noise is canceled. Twisted designs (such as Star Quad) are among the most effective in keeping the noise very low: typically, such cables can run for several meters with close to no loss of signal quality.
The Shadow 2 cables are arranged in a proprietary geometry, called “Helical array”, which is an evolution of twisted designs.
Helical array involves 6 conductors, 3 for positive signal and 3 for the returning signal. The two groups of 3 conductors spiral towards opposing directions, around an inner core, so to cancel the magnetic fields along the length of the cable.

I have tested the Dynamique Shadow 2 cables with the following gear: 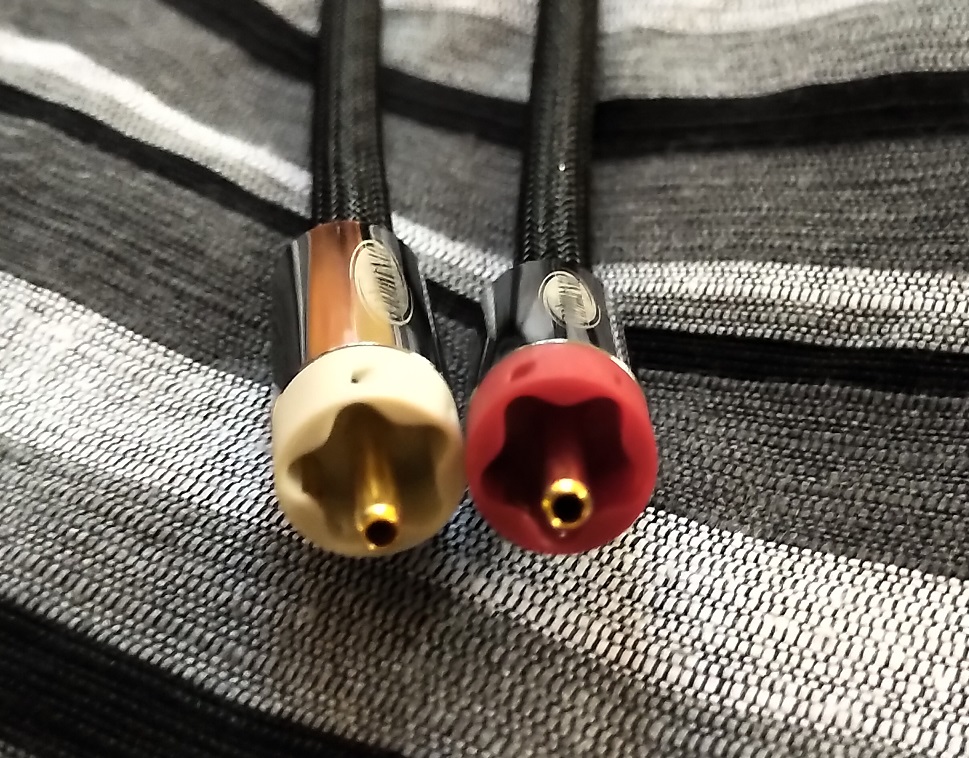 The Shadow 2 interconnects use 6 solid-core silver conductors (all with the same cross-section, 24 gage) and are twisted following the aforementioned Helical array design.
While silver is sometimes associated with treble, this mostly depends on poor design (and often using stranded silver, as opposed to solid core).
The Shadow 2 interconnects provide a neutral tonality, crisp high frequencies which interact with midrange to provide a life-like sound. They don’t add a layer of warmth, nor they raise high frequencies. The lower range is more linear than using my cables (Di Marzio, Kimber Hero, and my DIY-made ones, Mogami 2534 Star Quad and Silver Sonic BL-1 with Neutrik ProFi), the deep bass is easier to feel by consequence of the more even energy distribution. Using my Stax setup and my speakers, details have better definition, are represented very precisely in the space without being actively concentrated on them.
While the treble has no roll-off, it is well controlled and there is no sibilance: such control is also part of why instrument placement is so precise, since otherwise images would have been portrayed in a more rough way (audibly and “visually”, in the space). 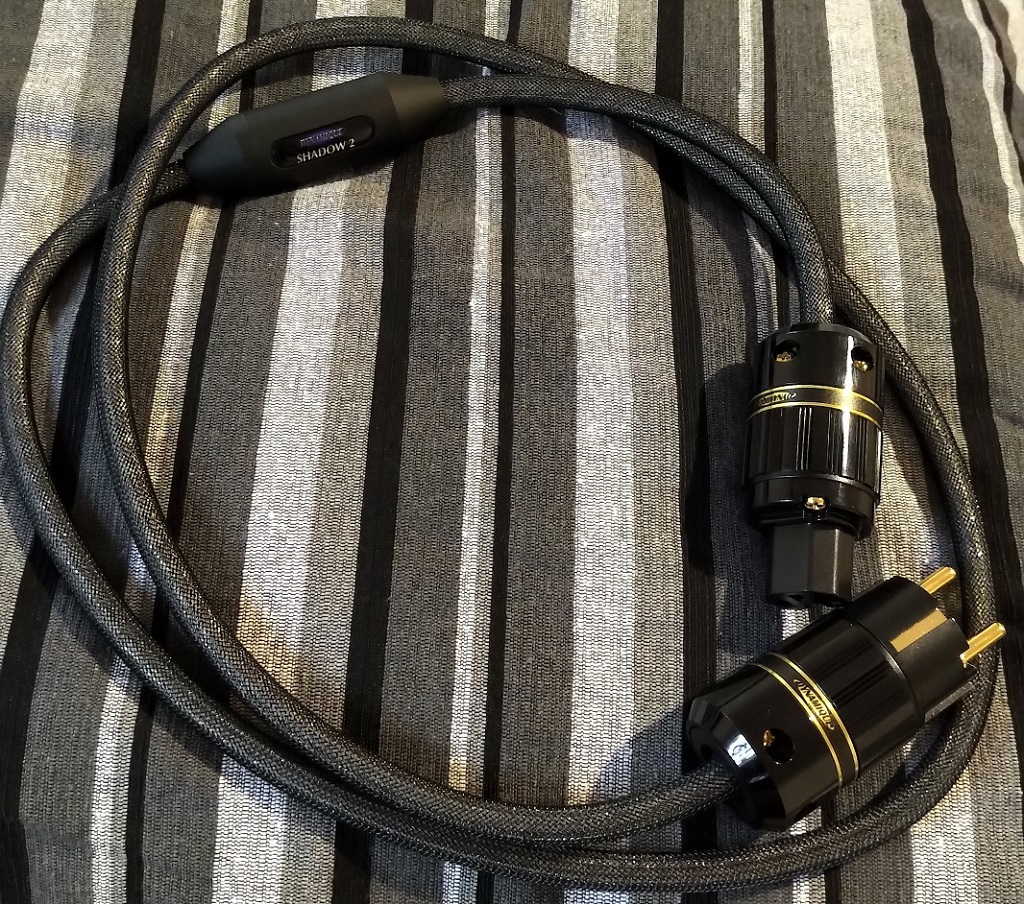 The Shadow 2 power cable shares the Helix array design of the interconnects; in this case, though, there is a seventh, central conductor used for ground.
Furthermore, the three conductors running in each direction, are different: one is solid core silver wire, while the other two are solid core silver plated copper wire with different sections. Such variability has been chosen in order to fine-tune tonality and speed of propagation of the signal. Together, the 3 conductors running per each direction are equivalent to 13 gage.
Using my speakers, upgrading my DAC power cord from my former favourites, DIY-made Ricable U4P and Thender SPC (high quality shielded cords which large cross sections, which used to be my favourites best in serveral comparisons), spatial clarity is further improved, as much as when upgrading from a stock cord (or from “decent” Cablerie d’Eupen cables) to my selected DIY favourites, not in the sense of hearing additional “particles”, but because instruments are much more clearly distributed in the third dimension (depth). It’s like adding 3D perspective to a painting, or removing a screen between the listener and the show. As consequence, sense of air is improved thanks the clearer distribution of images.
Positoning the Shadow 2 power cord on the Stax SRM-727A amplifier, I got slightly less powerful improvements: I could detect better disposition and deeper spatial distribution, but the improvements were less obvious compared to applying the Shadow 2 on the DAC, requiring more active concentration to detect the differences. This could be because of two factors: my amplifier being less sensitive than my DAC to power currents, or the simple fact that my SRM727A, being 100v (Japanese amplifier) requires a step down transformer which is a further variable in the system.

Both Shadow 2 IC’s and PC are really well thought, use high quality components and designed following a no-frills approach, are priced very reasonably in terms of build quality and sound.
As analyzed, the Shadow 2 improve on parameters as power, clarity, resolution, without messing with neutrality of the system. Both the interconnects and power cord achieve this and are very rich sounding, both tonally and detail wise. While the ICs have consistenly similar effects when put in a system, the magnitude of the improvements brought by the power cord is more strictly tied to the component it is applied to: DACs and transports are definitely the most sensitive components, while the effect on amplifiers would vary, depending on how high-end (and sensitive) the component is.