My new toys are the Dunu Titan canalphones. Specifically, I am reviewing Dunu Titan 3 and Titan 5, both models being heirs to the Titan 1, both coming roughly at the same price (120 Euro whereabouts).
The Dunu Titan 3 and Titan 5 have identical looks, but are tuned for different flavours, one being more tuned to the bass frequencies (the Titan 5), and the other more tuned towards the upper midrange.
The Dunu are vented canalphones, and are slightly different from regular IEMs, since they don’t have as deep insertion. Such design implies that isolation is only partial, which can have upsides and downsides (on the good, they are safer for road awareness; on the bad, some details are lost in noisy transports or you can hear bus engine, for example, or uneducated people talking too loudly).
Isolation is still much superior to earbuds, clip-ons and some closed headphones such as Audio-Technica ATH-ESW9, and is almost the same as Sennheiser Momentum. 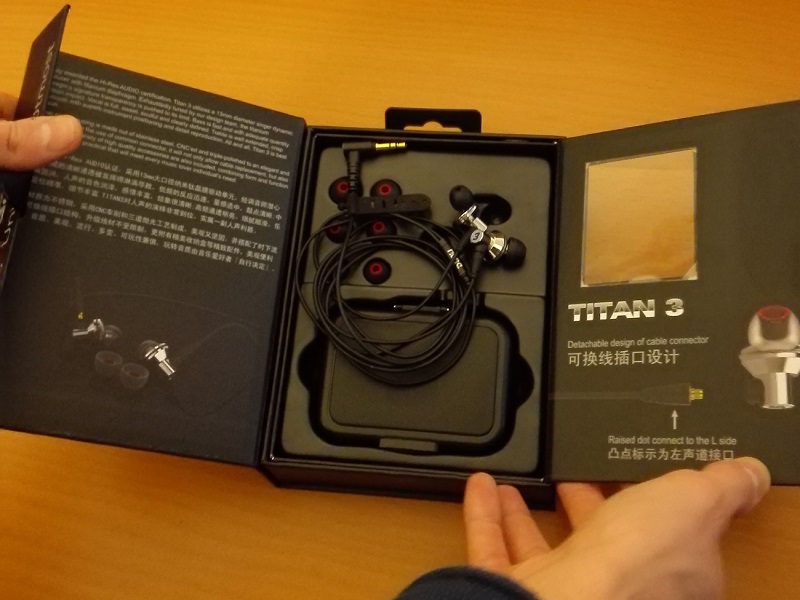 The Dunu Titan canalphones use the same eartips as Sony, Sennheiser, Ultimate Ears canalphones. All these canalphones share the same nozzle width (wide, short nozzle, as opposed to Etymotic, Westone, Shure, which have narrow, longer nozzle), meaning that one can try more tips over the already varied selection coming with the Titans.
Canalphones with wide nozzle have less deep insertion compared to Etymotic and the likes, and cannot be pushed deeply in the ear. Preference towards one or the other design depends on taste and getting used to it.
The cables in the Dunu Titan 3 and 5 are pretty flexible and microphonics are very tolerable and not excessively noisy.
Both Dunu Titan 3 and Titan 5 canalphones have removable cable, which is a very welcome “life insurance”, since cables are usually the most fragile breaking point in any portable headphone.

The Titan 3 are the more midcentric model. The upper midrange has strong presence, so vocals emerge easily in the mix, as well as guitars, trumpets, and other instruments with strong midrange energy. Treble is very smooth yet detailed, never sibilant. Detail retrieval is quite impressive, especially because it’s not achieved with treble spikes (which happens with several other in-ears on the market). Instead, there is a bump in the upper midrange, around 4kHz, so sporadically certain notes (mostly found in Electronic music, or female vocals) become a bit too resonating, giving a bit too emphasis on certain passages over what I’d have expected.
The rest of the frequency response is very even. Treble is spot on, neither attenuating metallicness (such with cymbals), nor producing artificial sibilance.
The bass, while not being the most powerful, is very tight, fast and detailed. It’s there when it needs to be, contributing strongly to the sense of rhytm of the music. It’s more natural and less thin than, for example, the Etymotic HF-3 (or HF-5), which are more strongly tuned towards the midrange and treble, but where the bass is always too lower volume compared to the rest of the spectrum, resulting in a too digital sound signature.

The Dunu Titan 5 have more even upper midrange than the Titan 3, present but never resonating; they are tuned to have more powerful bass than the Titan 3. As a result, the sound is fuller, and vocals are more meaty. They kind of remind Ultimate Ears Triple.fi 10 Pro, but with better midrange presence. Bass is big sounding, outside of the head, and is helpful to the soundstage because it works like a out-of-ear “pavement”, from which the other sounds stem (midrange instruments, which are by nature prone of sounding centered/in the head; and treble sounds).
The Titan 5 are more energic than the Titan 3. Treble is smooth and detail retrieval is similar to the Dunu Titan 3, but where the Titan 3 can sound more revealing and “monitor-like”, the Titan 5 are tuned to be more “fun”, more bombastic, and ultimately have some extra bass which helps the sense of isolation, and never becomes unwanted nor invades the midrange.
The rest of the treble is basically flat and perfect, perhaps a bit rolled of but in a good way since it retains the details and gives the whole tonality a warmth and sense of envelopment that makes the music better and more real, intimate.

The Dunu Titan 3 and Titan 5 are very good products for their price bracket. They are both tuneful and good sounding, and sound very good compared to some of the better in the price range (Klipsch Image X10, Etymotic HF-5). While there isn’t a single IEM in this price range doing everything perfectly, they are overall balanced, and very detailed.
The Titan 3 behaves in a great way on both bass and treble portrayal. Midrange is clear and “big” sounding, although unforgiving over recordings that are prone to screech or honkiness.
The Titan 5 are probably my personal favourite of the two, because of being smoother in the midrange, and while being a bit less “precise” in the bass department, adding some weight to certain instruments, they are overall balanced and very, very musical.