The Hifiman RE2000 is the new flagship dynamic driver In-Ear Monitor produced by Hifiman, and one of the most interesting headphones come out lately.
Dynamic driver IEMs have come a long way since a few years ago, when they first appeared in opposition to the many IEMs produced with balanced armature technology.
Dynamic driver IEMs have several advantages, such as more frequency extension, more linear treble, powerful bass due to bigger diameter. When the first dynamic driver IEM’s were produced, they were regarded as a bit less resolving than balanced armature drivers, but through the years, evolution of technologies and expertise brought out many examples of rich sounding and super resolving dynamic driver IEM’s, starting with Hifiman’s own RE0 (about 10 years ago) or RE262, and, more recently, RE600. 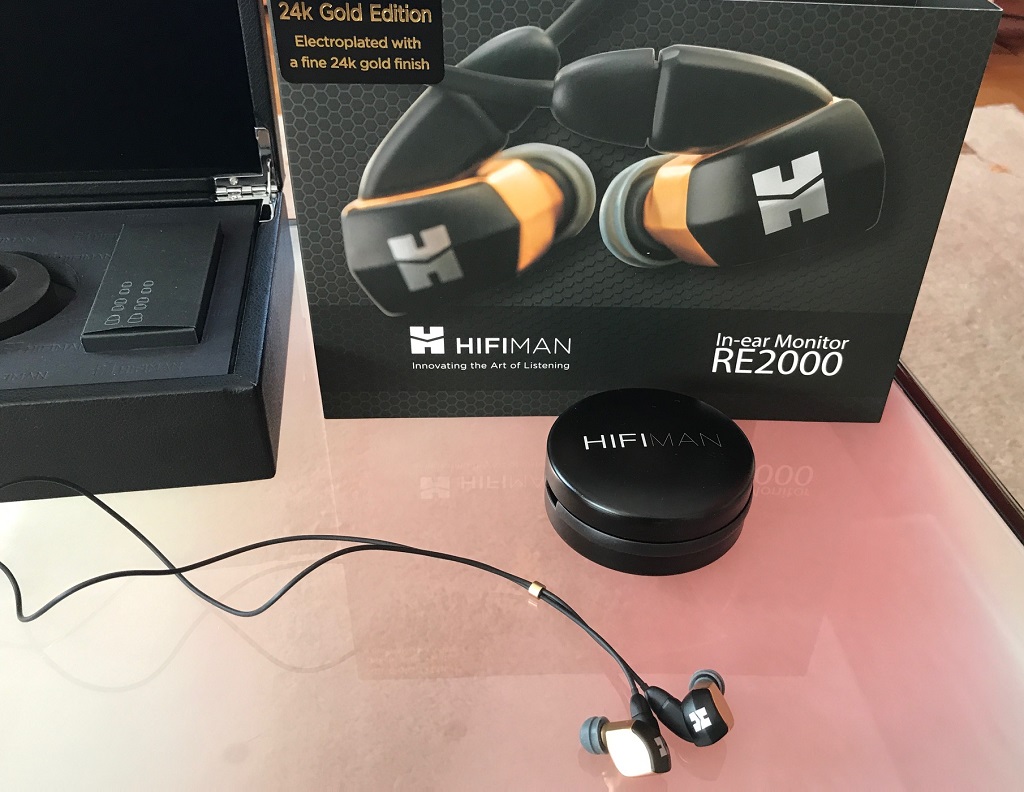 The Hifiman RE2000 uses a new diaphragm taking advantage of their newest nanometer technologies and using a special mix of coating.
The housing is specifically engineered to work with the new diaphragm, and being very ergonomic at the same time. In certain cases, IEMs designed around the driver proved to be very unfomfortable and big, being this the case of Dunu 2002 (a multidriver IEM), but the Hifiman RE2000 is comfortable, light and phisically very balanced, staying firmly in place in all situations, with both silicon and foam tips.
They are built like a tank, and have a wonderful industrial design, which combines particularly well with the gold plating. They are very appealing visually and almost look like a Transformer.

The Hifiman RE2000 has removable cable, always a welcome option when expecting long life out of a IEM, and especially desirable for a flagship product.
The cable is super sturdy, and the removable connectors are very well engineered. The 2 pins connectors, going from the cable to the drivers, are much better than the MMCX connector used in other IEMs like Dunu or TFZ. Such IEMs ended up being very fragile and developing random cut-offs caused by the poor interaction between that kind of connector and the driver.
Hifiman, instead, made the right choice, using 2 pins connectors like several custom IEMs producers do; plus, the connectors are covered with a plastic-rubber section that’s designed to give very strong stability, so the connectors are well protected.

The cable has close to no microphonics, and thanks to the way its body was designed, it doesn’t get in the way while walking or commuting. 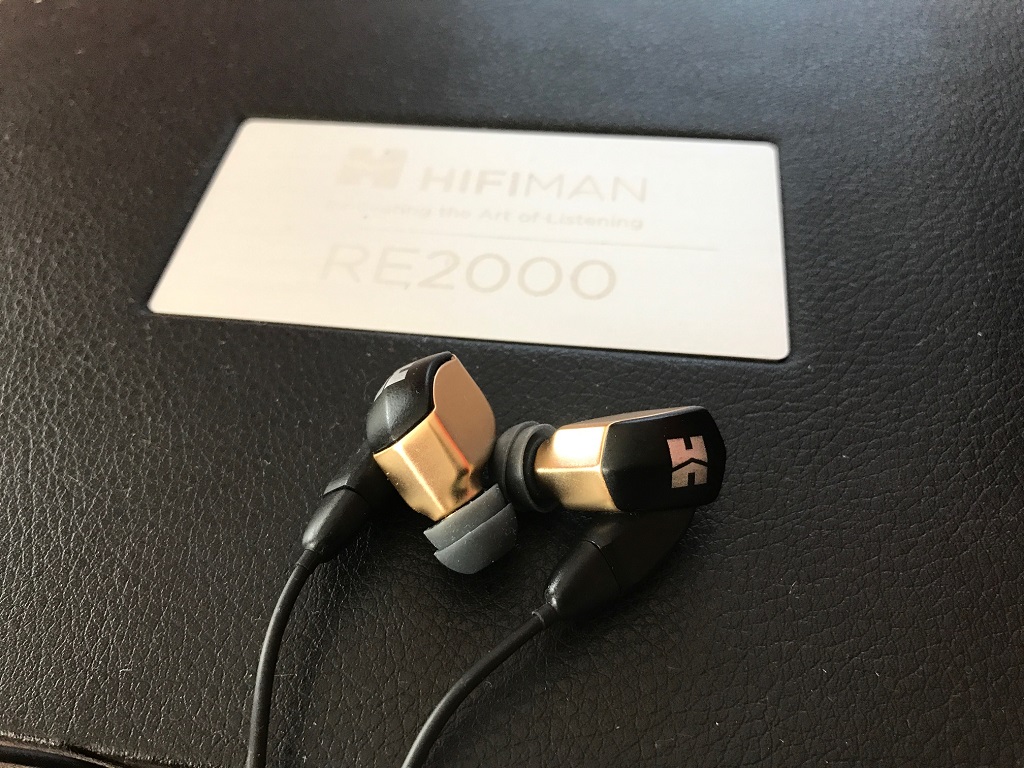 My sound impressions are based on silicon tips and foam tips. While I prefer to use foam tips with the Hifiman RE800 (which I am also testing), I find differences to be minor with the RE2000, both in sound quality and comfort.
While the RE800 and RE2000 share similarly truthful and natural signature (being free from weird colorations such as the TFZ, or from roll offs at frequency extremes typical of many armature driver IEMs), the Hifiman RE2000 is the more complete IEM. Where the RE800 can be seen like a monitor, the RE2000 is markedly more full bodied, saturated and reaches much deeper. The Hifiman RE2000 gives everything at any part of the frequency spectrum, sounding lush and with lively, beautiful vocals, a combination of warmth, vividness and linearity. Music is full of different colour nuances.
All the frequency are extremely well integrated and there are no narrow peaks/valleys.

The RE2000 has huge images, especially vocals, trumpets, sax, and generally midrange based instruments.
The soundstage is impressively deep. Thanks to the big images and vivid tonality, the instruments sound close to the listener, but giving the impression that there is space behind them. This gives the perception of a huge soundstage, high definition around instruments and very black background.

The Hifiman RE2000 has thunderous deep bass when the recording calls for it, and the right quantity of mid-upper bass to sound correct tonally. The bass hits out the head and helps strongly with the sense of ambience, supporting the big images that represent the instruments

The RE2000 is extremely smooth and it’s possible to turn on the volume a lot, without any frequency range taking over the others.
Most IEMs sound pale in comparison. Such intensity is not achieved this through darkness: for example, compared to Westone UM3x, which has very good tone but is a bit rolled off, the Hifiman RE2000 has similar lifelike tone but is much more airy, even and resolving.

The Hifiman RE2000 is very rich sounding, and differences through recordings are very apparent, especially given the difference in dynamics when changing from a recording to another, varying from “flat volume” (if the track is recorded in such way) to very big volume variations within dynamic passages on other tracks.
In any case, the musical message is well preserved on every kind of recordings thanks to the colourful and realistic tone. This is a bless compared to more monitor-like headphones where old recordings could end up sounding skinny, only because they were tuned towards a different kind of gear availanle back then.

The Hifiman RE2000 have that special quality common to “end of the game” headphones: a mix of realistic tone, intensity, rich midrange, smoothness, tactility and resolution; in other words headphones without serious flaws that are able to reproduce music realistically.
On top of this, the RE2000 has very deep bass and very big soundstage for its tiny size.
Such great sound is offered in an ultraportable package, along with isolation, comfort and great build quality, making it very desirable. The RE2000 is not cheap, but it should be directly compared with the best custom IEMs, against which it is designed to compete, without the annoyances and costs associated with the need of taking custom molds.
The Hifiman RE2000 should be seriously considered by everyone who rates portable listening very highly and wants to spend high quality time without the constraint of being tied to a home setup. 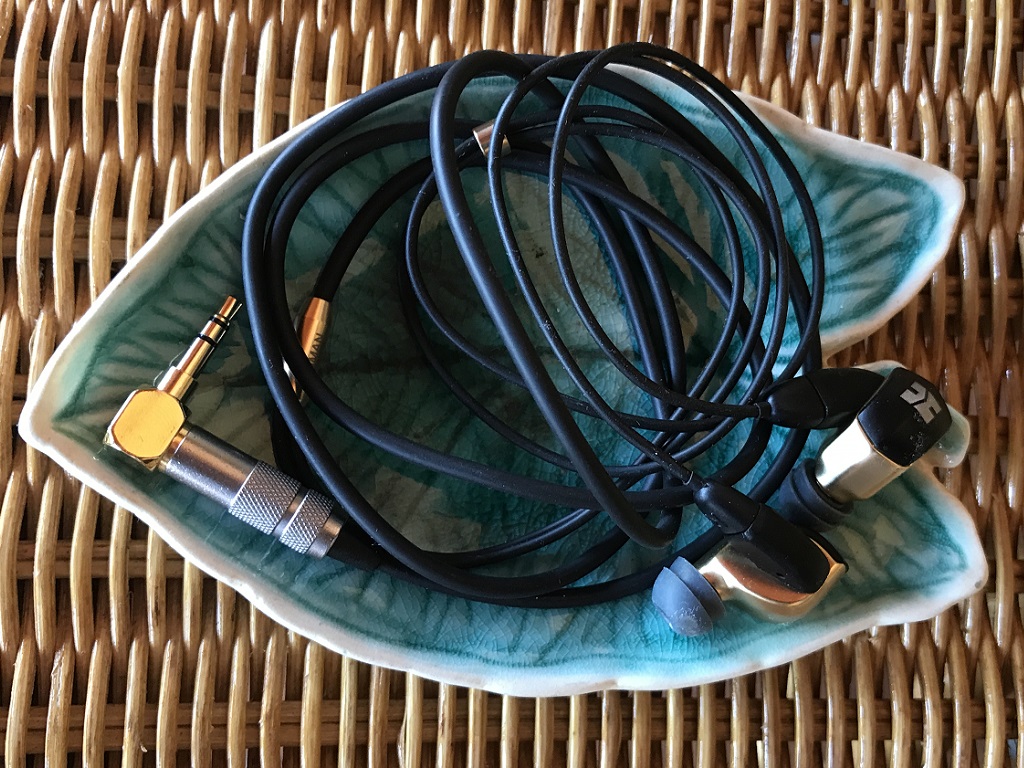