This is the review of the SOtM sHP-100, a portable dac/amplifier combo designed for computer audio. SOtM has made itself known especially for their network players/streamers, such as the tiny sMS-100, which offered several features, stability, and high performance, for a much cheaper price tag than its competitors.
The sHP-100 is built on the same principle (and in the same tiny box), aiming to deliver a comparable level of performance for the price, and ease of use.

The whole set of specifications can be found on the website, but I am reporting the ones I consider most meaningful for the user: 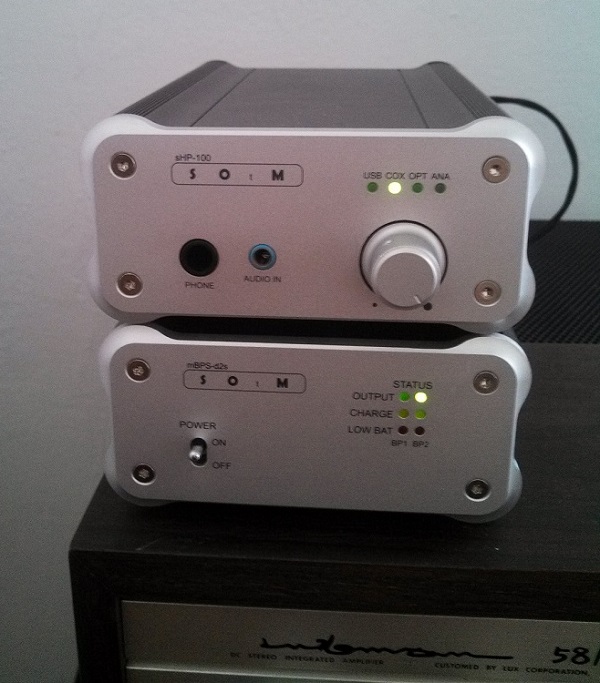 What It Is For

Although I have tested the SOtM sHP-100 with my speaker setup (the “usual” Mordaunt Short Performance 6 and Luxman L58A), as well as my current orthodynamic headphones (HifiMan HE-1000), the real place for the sHP-100 is at work, on my office desk, with my Sennheiser Momentum (and, for a brief period, Momentum 2.0). I think it’s the perfect companion for a day at work, where listening to music from the computer headphone out is hardly tolerable (every computer I used always had noticeably worse sound quality than my Motorola Android phones). It’s compact, low profile, doesn’t earn me any weird eyes from my collegues, and it’s much easier to operate than a high quality portable player.

The SOtM sHP-100 has a neutral character. It’s a character that’s very flexible, allowing for the sound to be fine tuned by other elements in the audio chain (in my case, the headphones). It doesnt have any kind of peak in the treble, nor any excess in the bass area. The bass is clean and quick, it doesnt have the ultimate punch, but in this regard it’s not worse than any DAC under 1000 Euro (such as Metrum Octave Mk2, jKenny Ciunas, Yulong D200., Mytek 192) or even over that threshold (Metrum Hex).
While not having the special midrange magic that the Metrum DAC’s, and very few other, much more expensive sources have, it has a smooth, pleasant balance, without lacking in the midrange, and being free from digital glare found in other DAC’s (especially those based on Sabre). The DAC is not prone to sibilance, it just tries to render the music without any range overpowering the other. Due to its neutrality, it doesnt interfere with the frequency response of the headphones and this aspect makes it very adaptable.
I have been using the portable battery with it, but to the the improvement was not major. The bass gains more heft and better dynamics. I think that perceivable gain from adding the battery PSU (or a simpler, cheaper regulated PSU) varies depending on the headphones used: the Sennheiser Momentum and Momentum 2.0, which I used the most, are very easy to drive; on the other extreme, my HifiMan HE-1000 require a monster amplifier (I normally use the MacIntosh MHA-100), and the addition of the battery, if I try to drive it directly, isn’t enough to alter the overall sound signature. Appreciable results would be easier to achieve using headphones such as Audio-Technica AD2000 or Grado RS-1, which are more demanding than my portable Sennheisers, but still reasonably easy to drive. 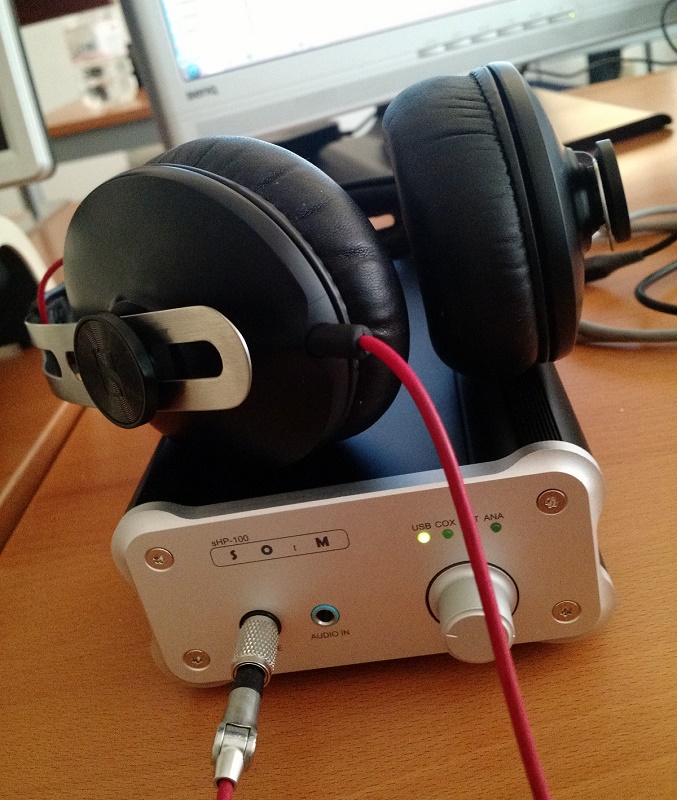 As previously stated, I consider the sHP-100 the ideal companion for listening to music in a work environment. I listen to it at work as much as I do with my smartphone when I am on the go. These two configurations (work and portable), actually take up 80% of my listening time, more than I can do at home with my high end rig in my spare time.
The headphone out, while not up to the task with demanging headphones such as the HifiMan HE-1000 and Sennheiser HD-600, both of which I tried, is completely up to the task in squeezing the potential of my portables (and even the Sennheiser HD598).
The DAC, which is the highest point of the sHP-100, could well be paired with something really high performance like the Stax SRS-005 portable electrostatic headphones, for a kind of ultimate mini setup.