The Hifiman SuperMini is the newest entry in HifiMan’s line of audiophile digital audio players. It differentiates itself because it is extremely small and thin, especially when compared to the much bigger HM-901S and HM-802S. It’s also a very elegant player, with a beautiful line.
The SuperMini has been researched in order to obtain a sound quality approaching its bigger brothers, and in my opinion its sound signature is very similar to that of the HM-802S, which I reviewed here. While the HM-901S is the brighter, more detailed of the two bigger brothers, the SuperMini and HM-802S have in common a darker, fuller signature.

The SuperMini has been designed with three goals:
– to maintain a high sound quality, similar to the other, bigger HifiMan offerings;
– to be very thin and portable;
– to have good battery life (it approaches 22 hours).

In order to achieve the aforementioned goals, HifiMan has followed a different strategy compared to its former designs: while the HM-90x, HM-80x, H-60x families use an external DAC (resulting in high power consumption and the need to create a circuit layout around them), a low power controller chip has been selected for the SuperMini, with a built-in audio DAC (similarly to what happens with smartphones). HifiMan team heavily modified the firmware and decoding drivers on such controller, in order to achieve the desired sound signature and power specifications.
The SuperMini is indeed very powerful, and can power to very high volume full size headphones like HifiMan HM-400i, Meze 99 Classics, Sennheiser Momentum 1 and 2. It can reach a volume level of 32 digital steps, but I have never felt the need to go over 24 steps with all the mentioned headphones.

The SuperMini supports Mp3, as well as all the common lossless file formats at any resolution: wav, flac, alac, ape, aiff, dff, dsf.

The HifiMan SuperMini uses its own user interface, different from the “Taichi 2” (adopted on the HM802s and HM901s). It’s pretty much as intuitive, and easy to navigate, as the Taichi 2, although there is no scroll wheel in this case.

The SuperMini has a sound signature that is on the warm side of neutral. Treble is sweetened, smooth, midrange is colorful and bass is authoritative. The player is musical, never adds harshness nor sibilance. It has a slightly bassy character which helps in portable listening.
It’s, in every sense, a “super mini” version of the HM-802s.
The SuperMini is similarly detailed and full sounding, mainly differing on the scale of headphones it is capable to drive. Where the HM-802s is able to drive power demanding headphones with more authority (such as the HE560), the SuperMini can do the same with all portable headphones and less power demanding home headphones. The SuperMini succeeds where a regular mp3 player (or smartphone) would be too weak, or the SuperMini will drive a headphone with plenty of volume where a smartphone would be maxed up only to reach average volume.
The SuperMini can reach the same level of details, tone and power of the HM-802s, only with a bit less power demanding headphones that its bigger brother can drive. 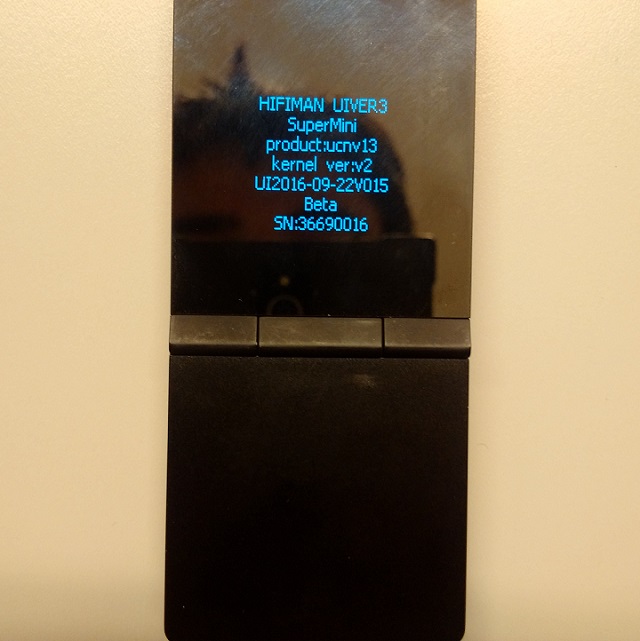 The SuperMini midrange-to-treble balance makes it an ideal companion for headphones like the HifiMan Edition S, the Sennheiser Momentum 2.0, the Meze 99 Classics, the Yuin PK1, less power demanding Grado’s, as well as all in-ear monitors.

The HifiMan SuperMini is a combination of very small size, high quality sound and believable sound signature, and high power. The slim size of the SuperMini means that portability is not sacrified.
It’s slightly warmed-up sound signature and smoothness make it an all arounder, in the exact same way I consider the HM-802s, and the use of a micro-SDXC gives it plenty of storage capabilities.
Its qualities combined make it an ideal player for people using portable headphones that are more demanding than a simple smartphone (or other DAP) amplifier and who are looking for a musical and coherent sound signature.